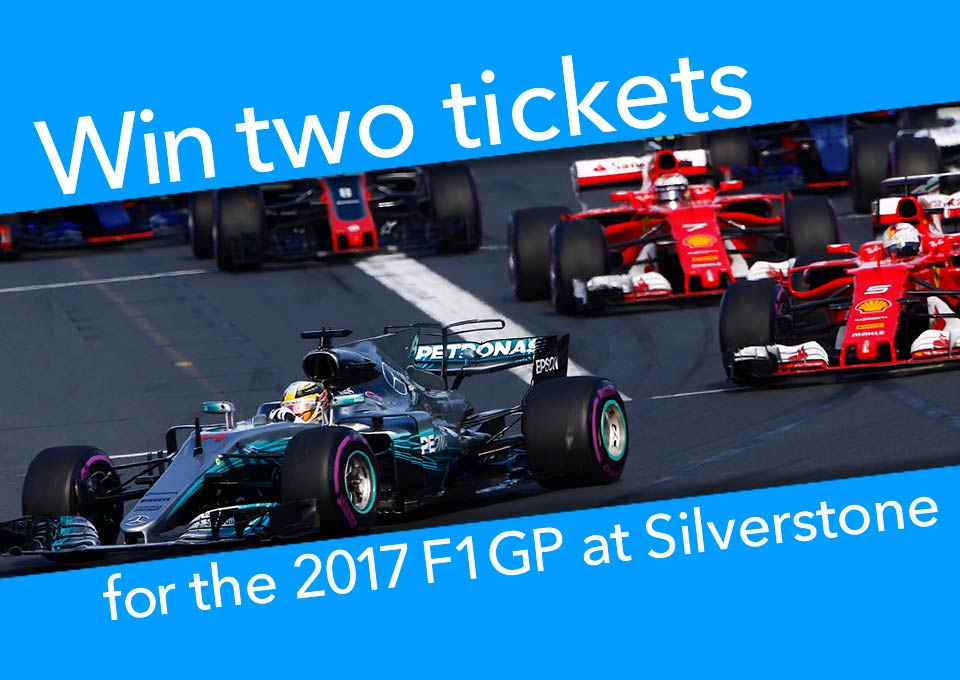 The competition is now closed. The winner will be drawn out on Monday 3rd July 2017. Watch this space!

Spirotech-SRD are offering you the chance to win 2 tickets for the 2017 F1 Rolex Grand Prix at the iconic Silverstone circuit on 16th July.

All you have to do to enter is send your name, company name and email address to Spirotech-SRD by the end of Friday 30th June 2017 and your details will be entered into the draw. The winner will be the first entry drawn out on Monday 3rd July 2017.

The prize is for two tickets for the Formula 1 Rolex British Grand Prix race on race day (July 16th 2017) at the Silverstone circuit in Northamptonshire.

The competition is now closed. The winner will be drawn out on Monday 3rd July 2017. Watch this space!

1. Participants may only enter into this competition once.
2. To enter participants must be 18 years or over at the time of entry.
3. The competition will run from 0900 on Friday 12th May to 23.59 on Friday 30th June 2017.  The winner will be notified by 17.30 on Tuesday 4th July 2017.  The winner will be chosen in front of an independent observer (the “Observer”) at random.  If we do not get a response from that email within 24 hours then we reserve the right to offer the place to another customer.
4. Winners will be notified by email.  Spirotech-SRD’s decision will be final, and no correspondence will be entered into.
5. Once the prize draw has taken place, participants can obtain details of the winners by contacting Spirotech-SRD by post.
6. By entering the promotion the prize winners agree to participate in publicity and material resulting from the promotion if requested to do so by Spirotech-SRD.  Spirotech-SRD reserves the right to use the details of the prize winners in any publicity or material.
7. The promotion is not open to employees (or members of their immediate families) of Spirotech-SRD or any group company, subsidiary, subcontractor of Spirotech-SRD or anyone professionally connected with the promotion.
8. For the avoidance of doubt any personal data relating to participants will be used solely to market Spirotech-SRD services and offers and in accordance with current UK data protection legislation and will not be disclosed to a third party without the individual’s prior consent.
9. The prize is for: two general admission tickets to the 2017 Formula 1 Rolex British Grand Prix. Tickets to the 2017 Formula 1 Rolex British Grand Prix tickets are bound by their own terms and conditions available here. By entering the competition you are also accepting these terms and conditions.
10. The winner must be 18 or over on the day of event.
11. The prize is as described, not transferable, not exchangeable for cash and no cash alternative will be offered in the event that the winner is unable to claim or use the prize for any reason.
13. Spirotech-SRD reserves the right to amend the terms and conditions at any time. If Spirotech-SRD do this it will publish details of any changes on this page.
14. By entering the promotion, participants agree to be bound by these terms and conditions and by the decision of Spirotech-SRD in relation to all matters relating to the promotion, which shall be final.
15. Spirotech-SRD cannot accept any responsibility for any damage, loss, injury or disappointment suffered by any participant entering the promotion or as a result of accepting the prize. Spirotech-SRD is not responsible for any problems or technical malfunction of any telephone network lines, computer on-line systems, servers, or providers, computer equipment, software failure of any email or enter to be received on account of technical problems or traffic congestion on the internet, telephone lines or any website, or combination thereof, including any injury or damage to participant’s or any other person’s computer or mobile telephone related to or resulting from participation in the promotion.
Please note that the prize is for tickets only. It does not include travel, parking, accommodation costs or subsistence which are entirely at your own expense.